skip to main | skip to sidebar

lunch on the porch 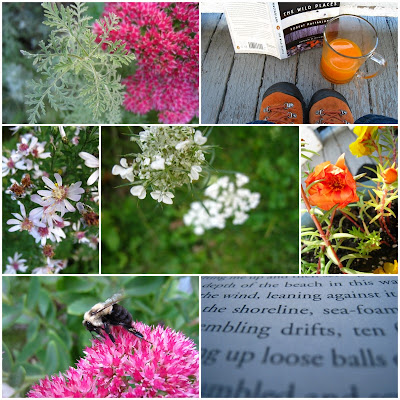 Reading: The Wild Places by Robert MacFarlane. Beautifully written.
Eating: Butternut Squash Gnocchi
In the glass: Orange/carrot juice to chase away this cold
Posted by Kate at 1:59 PM 2 comments: 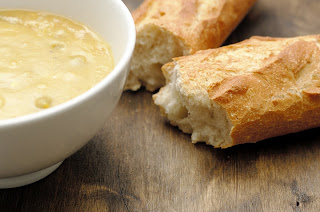 Why are all my comfort foods the same color? Seriously, I ask myself this every time I get sick. I end up craving custard, or rice pudding, teas heavy with milk and honey, toast with butter, soups rich with chicken fat and lemon juice, heated apple juice with honey and a shot of citrus... Is anyone else like this? Why don't I get a hankering for red? Or spicy foods? Why does beige food make me (a person who loves color) feel warm and cosseted?

I've been battling this cold for days, and telling myself that it's just allergies, but it's making itself known in full force today. Maybe you're familiar with that weird euphoria you get when you have a lot to do at work and there are pestilent forces frolicking in your system. Today was not the day to make major decisions, or to use the office shredder. I hope I didn't do either...

I am looking forward to the corn chowder I'll pull out of the freezer tonight. I used homemade chicken stock, so it's rich and fatty. I'll add a bit of cream and some lemon to the broth once it's heated, and I have some leftover rolls to warm in the oven. I'll try to home cook my way to health. It will be a beige meal, but if that's what my germ addled brain decides I want, I'm not going to argue with it!

Wouldn't it be nice to come home and find that your dirty laundry and dishes, your scuffed and dirty floor, and your stray detritus had magically cleaned themselves and returned to their places? I know it doesn't happen, but honestly, I would be a changed woman if it did.

We've had a long two weeks (well, a year really) of goodbyes. Several friends have moved away. Far away. Spend-a-lot-of-money-to-see-them away. London, Texas, Oregon. Email doesn't quite cut it, and we are not fans of the phone. I realized this week that we've been having send off parties and last-time-to-____ gatherings for a year now.

The most recent rash of festivities was for Ethan, who moved to Portland, Oregon after ten years of being my neighbor and twenty years of being practically another sibling. We are incredibly excited for him - it's a great community to move to and will fuel his artistic life. We're excited for us too - what a cool place to visit. We're also trying to figure out what to do with ourselves now that there are so many spaces that fun people used to occupy... Which means, in all honesty, that we're sitting in our apartment wondering why the dirty leavings of our daily life won't just up and wash themselves, the brats. And we're staring at each other with the glazed look couples use when they're too tired to invest in conversation beyond the words "what?" "nope" and "uh-huh".

Pitiful huh? We have other friends, and they are pretty cool. But they're an hour or more away, and it takes some planning because somehow, when we weren't looking, we all went and became adults with lives. It really gets in the way. I'm still trying to figure out how to make playing the point of my adult life without coming across as some nut with responsibility and commitment issues. If I were say, a river otter, none of this would be a problem. But that's as likely as my dishes and clothes pulling a Disney moment and becoming pleasantly animated and dutiful.
Posted by Kate at 5:18 PM 2 comments: 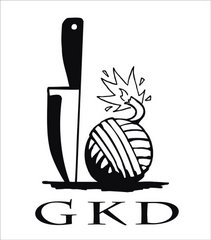 Visit Our Friends and Family